Bacchus Awards, managed by the Spanish Tasters Union (Unión Española de Catadores) have just reached its 20th edition. The objectivity and reliability of this Association helped to consolidate Baco Awards as the most important contest in which the current Ministry of Agriculture, Food and Environment annually recognizes the top wines. Complete anonymity of the samples submitted to the jury by keying in opaque bottles covers, service by sommeliers and use of the official records of tasting the Spanish Tasters Union for major national and international wine competitions ensure complete objectivity of the ratings awarded.

Numun Syrah 2013 from Bodegas San Isidro has obtained the maximum consideration granted by the UEC, the Golden Bacchus. This award recognizes Numun Syrah as one of the best vintage wines of Spain and joins to the record achieved by this wine in less than three months, as it recently obtained the gold medal at the Berliner Wine Trophy.

Numun Syrah has its origin in a wine made from grapes harvested in the transition from night to day, at dawn. Therefore grapes arrive to the winery at a low temperature (14/17 º C) and the Biodynamic cycle of the vine makes it to forge its character at the time, and therein lies the reason for Numun. Then, a careful manual selection of grapes takes place.

Its label suggests the moon background and, in the foreground, a number of winegrowers in the vineyard… Shades are dark because it seeks to represent the light that occurs when the wine collection. Numun family has two young varietal wines from Syrah and Monastrell. In the coming months, BSI will launch Numun Crianza. Numun is a wine that can be found on the menus of the best restaurants and wine bars of this region. 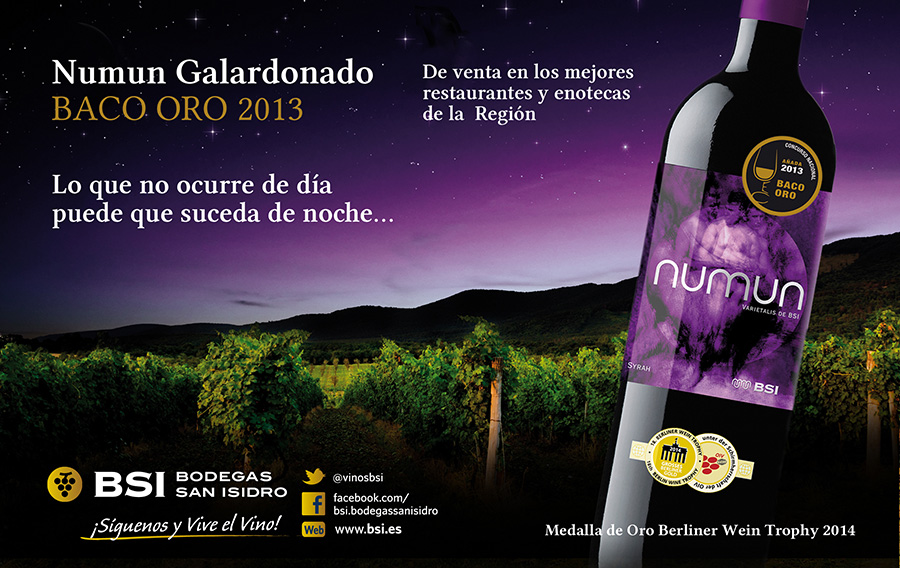